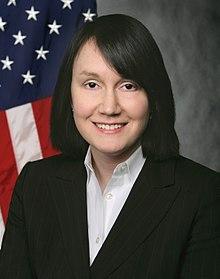 The Honorable Kristine Svinicki was designated Chairman of the U.S. Nuclear Regulatory Commission by President Donald J. Trump on January 23, 2017. She is currently serving her third term, ending June 30, 2022. She began her service on the Commission in 2008.

Chairman Svinicki has a distinguished career as a nuclear engineer and policy advisor, working at the state and federal levels of government, and in both the legislative and executive branches. Before joining the NRC, Svinicki spent over a decade as a staff member in the United States Senate advancing a wide range of policies and initiatives related to national security, science and technology, and energy and the environment. She also served as a professional staff member on the Senate Armed Services Committee where she was responsible for the Committee's portfolio of defense science and technology programs and policies, and for the atomic energy defense activities of the U.S. Department of Energy, including nuclear weapons, nuclear security, and environmental programs.

Previously, Svinicki worked as a nuclear engineer in the U.S. Department of Energy's Washington, D.C. Offices of Nuclear Energy, Science and Technology, and of Civilian Radioactive Waste Management, as well as its Idaho Operations Office, in Idaho Falls, Idaho. Before that, she was an energy engineer with the State of Wisconsin at the Wisconsin Public Service Commission in Madison, Wisconsin.

Born and raised in Michigan, Svinicki earned a bachelor's degree in nuclear engineering from the University of Michigan in 1988. She is a longstanding member of the American Nuclear Society and the Society has twice honored her with its Presidential Citation in recognition of her contributions to the nuclear energy policies of the United States. Chairman Svinicki was named Woman of the Year by the Women's Council on Energy and the Environment in 2013. She was selected as a Stennis Congressional Fellow of the 108th Congress and as a Brookings Institution Legis Congressional Fellow in 1997. She has been honored by the University of Michigan College of Engineering as its 2009 Alumni Merit Award recipient for Nuclear Engineering and Radiological Sciences and, in 2017, was awarded the College's Alumni Medal.